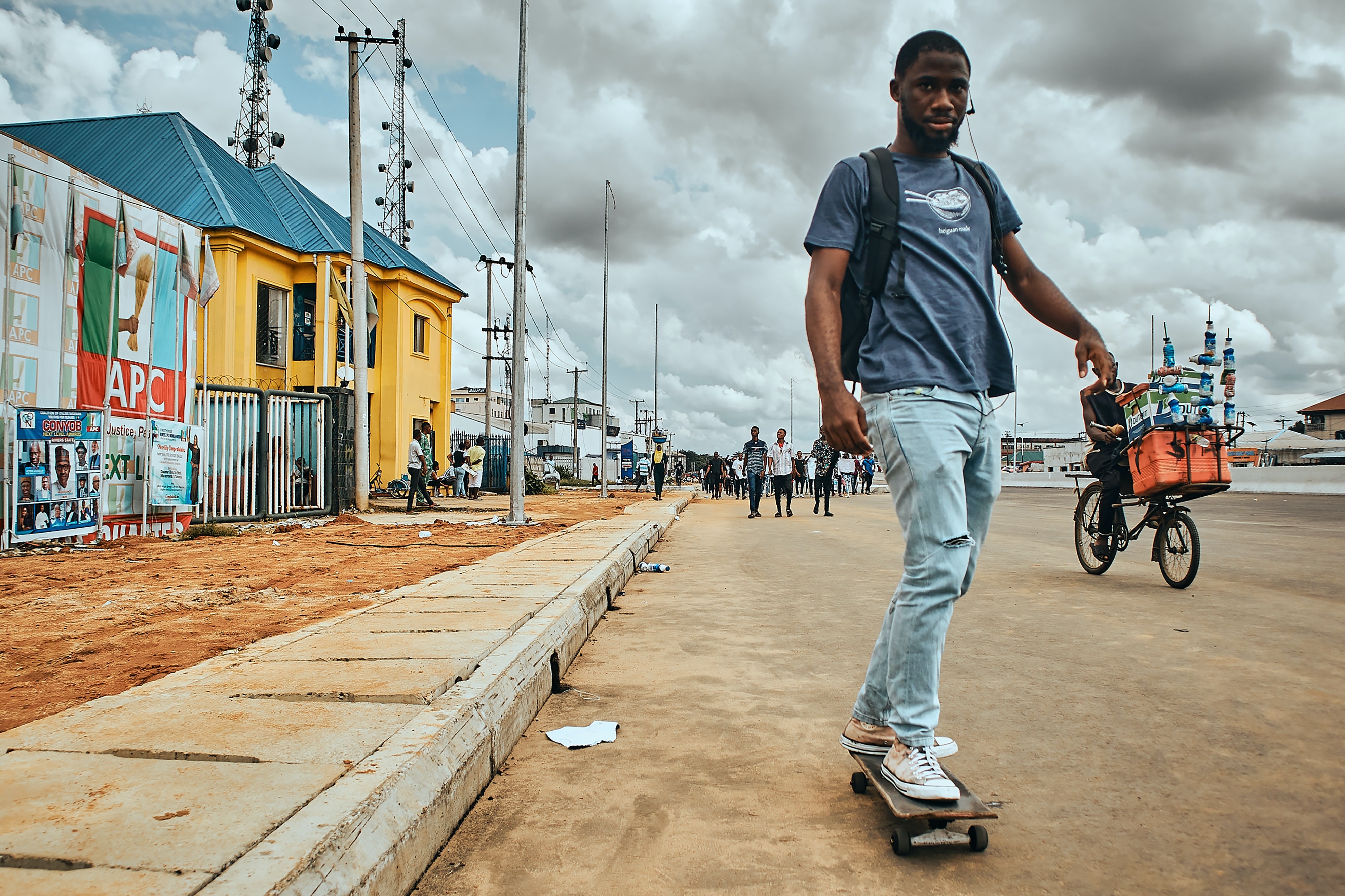 The latest edition of the African Human Mobility Review (AHMR) can now be found online on SIHMA’s website. The peer-reviewed journal contains five papers related to migration in Africa. This article will address the topic in one of the journal’s papers, entitled ‘Economic and Risk Perceptions Motivating Illegal Migration Abroad: Port Hartcourt City Youths, Nigeria’ [1]. The paper’s main objective is to “…investigate and understand the economic and risk perceptions that motivate Port Harcourt City (PHC) youths to take the illegal route of traveling abroad through the Sahara Desert and across the Mediterranean Sea.” [1, p.51].

A qualitative methodology was used to collect information for this paper to gain a better understanding of the Nigerian youths’ pattern of migration. It explores the current conditions of youths in Port Harcourt City; perceptions of opportunities abroad and in Nigeria; the youths’ knowledge of the risks they might encounter on the journey through the desert and sea; lived experiences of irregular migrants living abroad without documentation; access to networks; and the influence family members have on the decision to migrate. The author of this paper also highlights the distinction between ‘illegal’ and ‘irregular’ migrants. Due to the negative connotation of the term ‘illegal’, the term ‘irregular’ will be used when referring to a person, while ‘illegal’ will be used when referring to a status or process [1]. Thus, this paper uses the term ‘illegal migrant’ as it refers to the process of migrating abroad. More specifically, the paper addresses unauthorized entrants as part of illegal migration. This article gives an in-depth summary of the paper and provides additional information about the topic.

The refugee and displacement crisis in Nigeria has affected millions of people for more than a decade [9]. The crisis reached a new level from 2014, with conflicts between the non-state group Boko Haram and Nigerian forces [2] and the split of Boko Haram bring about the formation of Islamic State West Africa Province (ISWAP) since 2016 and ISWAPs subsequent expansion [13]. The country has experienced widespread human rights violations such as sexual and gender-based violence, forced recruitment and suicide bombings [2]. Additionally, the conflict has led to food insecurity and severe malnutrition. This has been further exacerbated by the harsh climatic conditions affecting the country [2], as well as environmental degradation caused by decades of oil exploitation [1]. According to the Migration Data Portal, 2.7 million people were internally displaced in Nigeria due to conflicts in 2020 [5], and another 143.00 were internally displaced due to disasters [6]. The number of Nigerian refugees in host countries were 353.000 the same year [7].

Studies from Nigeria have shown that environmental degradation is one of the main causes of violence, unemployment, and youth restiveness in the country [1]. Other research states that the high population growth in Nigeria also is one of the main reasons for poverty and high unemployment among the youth [1]. Nigeria is the most populated country in Africa with 206.1 million people [3], and with a growth rate of 2,6% [4]. The total unemployment rate in the country is 7%, while the rate among the youth is 13,7% [4]. According to one of the participants in the study, a high practice of nepotism has had a large impact on the high unemployment rate among the youths, and in Nigeria, the youth population represents a majority of the lower class [1]. For these reasons, many Nigerian youths have chosen to leave their homes in the search for better opportunities elsewhere by migrating abroad often through dangerous and illegal routes [1]. One of the study’s participant said the following:

I have graduated from university for over 5 years, but I have not gotten a job. There is a lot of nepotism, and corruption in the system. Even farming is a challenge due to harsh agrarian land. As an average youth in Nigeria, you must know someone who knows someone for you to get a decent job. Some female youths are sexually exploited for them to get a chance at a job. So, you can see why the motivation is high for youths in Nigeria to move to Europe in search of a better life through these dangerous routes (Port Harcourt youth resident). [1, p.61].

A study conducted in 2017 by the International Organization for Migration (IOM) found that there has been a significant increase in migrants traveling to Europe from Sub-Saharan African countries the past decade [1] (referring to [14]). Moreover, people of Nigerian descent were one of the larger migrant groups entering Italy and Greece, as well as a large proportion of the migrants trapped in Libya attempting to reach Europe [1]. In fact, in 2017 the largest proportion of migrants arriving in Italy by sea were Nigerian according to the UNHCR’s Central Mediterranean Risk Mitigation Strategy (2017) report [15].  Using a framework based on the Theory of Reasoned Action and the Cultural Theory of Risk Perception, the paper in focus investigates what lies behind the decisions to migrate to Europe, as well as the youths’ perception about this journey [1].

The Theory of Reasoned Action “suggests that an individual’s intention and decision to engage in a particular behavior is based on the outcome the individual expects will come as a result of engaging in such behavior.” [1, p.52]. In the context of migration, the Nigerian youths’ perception about the outcome in the destination country can therefore be the motivational factor behind their decision to migrate, and to go on these unsafe journeys to Europe. The study found that many of the Nigerian youths had an idealization of Europe, and this perception was based on what they had seen in movies and various social media platforms [1]. The motivation to migrate was especially influenced by their perception of job opportunities in the destination country [1].

According to the United Nations Development Programme (UNDP, 2019), one of the main motivational factors behind migrating to Europe is the prospect of changing the economic situation of their families to the better [1]. The study found that youths’ perception of migrating was heavily influenced by other youths from the community that had already migrated to Europe [1]. Statistics from the World Bank states that Nigeria received in excess of 17.2 billion USD in remittances in 2020 [8]. Remittances also made the influence from family members stronger, as they saw this as an opportunity to improve the livelihood of the family [1]. These factors have therefore further shaped the youths’ attitude towards migration, but interviews with irregular migrants that have reached Europe gave a less rosy image. Before they embarked on the risky journey, the young Nigerians pictured an easy life in Europe with good opportunities of getting decent jobs [1]. However, this changed a few months after arriving – if they even made it through the journey. The following is a statement from one of the study’s respondents:

I heard Europe was a nice and good place to hustle, but when I arrived, I realized that success in Europe is dependent on your status. Without a residency that offers a work permit, you cannot work or access the opportunities you imagined about Europe while you were in Africa. The unskilled job I got, did not meet my expectation; I was just working to survive. [1, p.62].

Other personal factors that can affect migrants’ decision-making are age, gender, religion, and spiritual beliefs [1]. For instance, religious youths might believe that their fate is in the hands of God. In such cases, they might not care about the risks or their safety on the journey because their futures have already been predetermined [1].

The study revealed that many youths do not have in-depth knowledge of the risks they may encounter on the journey to Europe [1]. One of the respondents said that the “majority of the youth have no idea of what crossing the Sahara Desert and the Mediterranean Sea looks like in real life ...” [1, p.63]. The findings further showed that the youths had been exposed to various unsafe encounters, such as heatwaves and attacks by bandits, smugglers and traffickers [1]. These encounters were often the cause of death of hundreds of migrants [1]. The United Nations Refugee Agency (UNHCR, 2019) had the same findings, and highlight how migrants are being tortured, raped, and kidnapped for ransom on this dangerous route [1]. The UNHCR’s Central Mediterranean Risk Mitigation Strategy (2017) further highlights how the increase of Nigerian migrants to Libya has resulted in illegal detention, human warehouses, and connection houses (sex houses) run by smugglers and traffickers [1]. UNHCR are increasingly alarmed about the situation of asylum seekers and refugees stranded in Libya, as the Libyan government has been targeting areas where migrants live through security operations [12]. This has led to the arrest and illegal detention of thousands of migrants. If the Nigerian youth were aware of all these risks, they would have been able to make informed decisions and the number of people migrating would most likely have decreased. One respondent said:

Looking back, I do not think the opportunities in Europe are worth the risk of the journey. I am now considering returning to Nigeria because the green pastures are not the way we thought. As an illegal migrant, you have no dignity (Nigerian irregular migrant in Germany). [1, p.65].

Many Nigerian irregular migrants have been the victims of human trafficking after embarking on the journey to Europe through Libya. 326 victims of trafficking were identified by the International Organization for Migration (IOM) between 2016 and 2019, and almost half were from Nigeria [10]. IOM has since 2017 assisted more than 21,500 Nigerian migrants in the process to return home voluntarily and reintegration them in the communities [11]. 15 per cent of these were assumed to be victims of trafficking. The following is a story from a Nigerian woman that was a victim of trafficking for sexual exploitation.

The woman that took us out of Nigeria was introduced to me by a friend. She told me about the woman and explained that she would like to take some girls… that she needs some girls to take to Europe and that if interested, we should let her know. We were eight so she took us all. She said we would be going to work in Europe. She didn’t tell us the nature of the work, but we were eager to leave Nigeria because of the situation of the country…As we reached Libya, the woman said that we had to work a bit before proceeding to the crossing, since the road wasn’t clear. I asked what the work would be and she said connection work [sex work]. Then I started crying, a friend of mine and I refused to do it. They started to beat us saying we must do it. That’s the scar on my face. They beat us and said we must do it.”
- Nigerian woman interviewed by Telling the Real Story, 2019. [10, p.15].

The study shows that the risks involved in embarking on these illegal routes through the desert and sea to Europe are extremely high. Unfortunately, the majority of the Nigerian youths do not have the in-depth knowledge to make an informed decision in regard to both the journey and living abroad. As the unemployment rate among the youth is high in Port Harcourt City, many make the decision to turn to illegal migration abroad to send money back home. Despite this, remittances from migrants abroad have been a huge contributor to the improvement of living conditions of many families in Nigeria.

Based on the findings in this study, more awareness-creation and enlightenment among the youth is recommended to make sure that the youth gain a better understanding of the risks involved in embarking on this journey [1]. Moreover, it is recommended that government agencies and the international community work together towards implementing sustainable interventions that will improve the resilience of youths against illegal migration [1].

Photo by Emmanuel Ikwuegbu on Unsplash