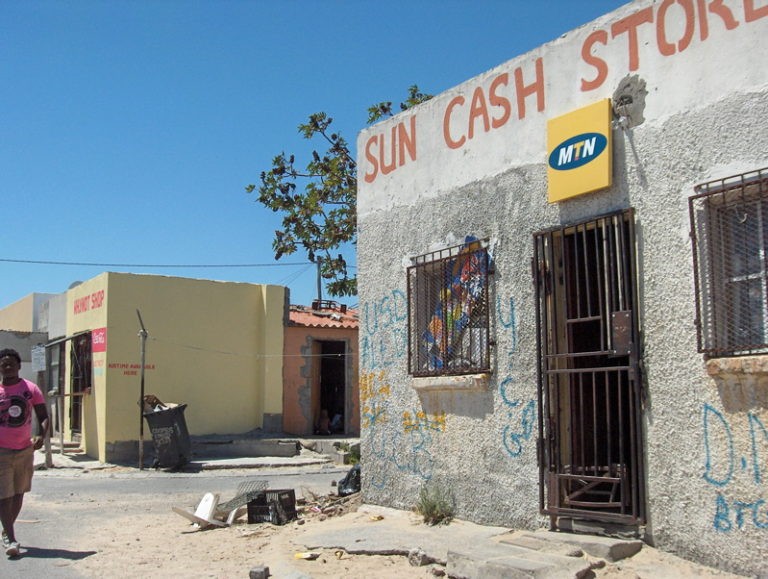 Spazas, Foreigners, and Crime – It’s More Complicated than That

In May 2008, the world watched in shock as xenophobic violence raged across South Africa. Nationals violently attacked foreign nationals, displacing tens of thousands of migrants and brutally killing over 60. Migrants’ properties and businesses were destroyed in great numbers, with over 550 foreign-owned shops looted or burned to the ground.

This storm of attacks ushered in a decade of rising awareness of xenophobic violence among South Africans, and it has become widely assumed that this violence and accompanying xenophobic attitudes are driven by migrants taking jobs and services from South Africans. As seen in the violence ten years ago, foreign-owned shops suffer high risks of being targeted because of this assumption, with grocery or convenience stores called spazas especially recognized as xenophobic violence hotspots today. Central to the economy of townships – predominantly poor, black settlements that are part of apartheid legacy – spazas are targeted with high levels of violent crime regardless of shopkeeper nationality, but foreign shopkeepers are at greater risk because they are believed to outcompete local shopkeepers.

In their article “Xenophobia, Price Competition and Violence in the Spaza Sector in South Africa” Laurence Piper and Andrew Charman investigate whether this assumption is supported by data and the actual experiences of shopkeepers of different nationalities. Though they find no absolute connection between foreigner status and price cheapness (business competitiveness) or levels of violence experienced, they discover a close correlation between crime levels and competitiveness. These results thus paint a much more nuanced picture of the dynamics at play between migrant communities, township businesses, xenophobia, and violent crime.

The last ten years have seen growing foreign ownership of spazas. Most foreign shopkeepers come from other African countries, with the survey including shopkeepers from Angola, Burundi, DRC, Egypt, Ethiopia, Lesotho, Mozambique, Namibia, Pakistan, Rwanda, Somalia, Tanzania, and Zimbabwe. An additional minority of shopkeepers come from Bangladesh. Approximately half of the shopkeepers in the survey sample were foreigners, and Somali was the second most common nationality after South African.

In order to disentangle the factors of nationality, price competitiveness, and violence, Piper and Charman drew on survey data from over 1050 shopkeepers in eleven township and informal settlement areas across Cape Town, Gauteng, and Durban. The surveys reported shopkeepers’ nationalities, their selling prices for twelve common products (milk, eggs, bread, sugar, Coke, cigarettes, etc.), and their experiences with violent crime over the past five years. While the price data was used to construct a price comparison across survey sites and shopkeeper nationalities, crime data was used to create a parallel comparison for the number of violent incidents – murder, attempted murder, armed robbery, theft, arson, assault, and harassment – across the same categories.

In terms of crime, 71% of spaza shops had experienced at least one crime in the past five years, and 45% reported a violent crime such as armed robbery, assault, arson, attempted murder, or murder. The types and levels of crime experienced varied significantly depending on the area and shopkeeper nationality. Bangladeshi, Somali, and Ethiopian shopkeepers reported the highest crime rates, and the least affected groups were Zimbabwean, Mozambican, and other foreign shopkeepers. South African shopkeepers fell in the middle – 62% had experienced crime in the five year span.

In all, the data reflects that regardless of nationality, running a spaza shop is extremely dangerous, though certain nationalities are especially at risk. The risk of murder increases to 46 times the national average for the typical shopkeeper, but for Somali shopkeepers, the murder risk is over 100 times the average.

Comparing the price data and violence records, Piper and Charman found a clear correlation between the level of violence experienced and price competitiveness, through their findings in terms of nationality are less certain. Listing the lowest prices overall, Somali and Bangladeshi shopkeepers faced the highest rates of crime, but while Somali shopkeepers suffered the most from extreme violence (such as armed robbery, assault, attempted murder, and murder), Bangladeshis experienced more mild forms (theft, arson, and harassment). This suggests that factors aside from price competitiveness contribute to the violence experienced by foreign groups.

To summarize, profitable shops with cheaper prices are more likely to experience crime than profitable shops with higher prices. This is only a general trend in the complicated network of issues surrounding foreign and local shopkeepers, price, experienced crime, and location. The article concludes that more research is therefore needed to determine the other factors impacting spaza and xenophobia dynamics in townships and informal settlements.