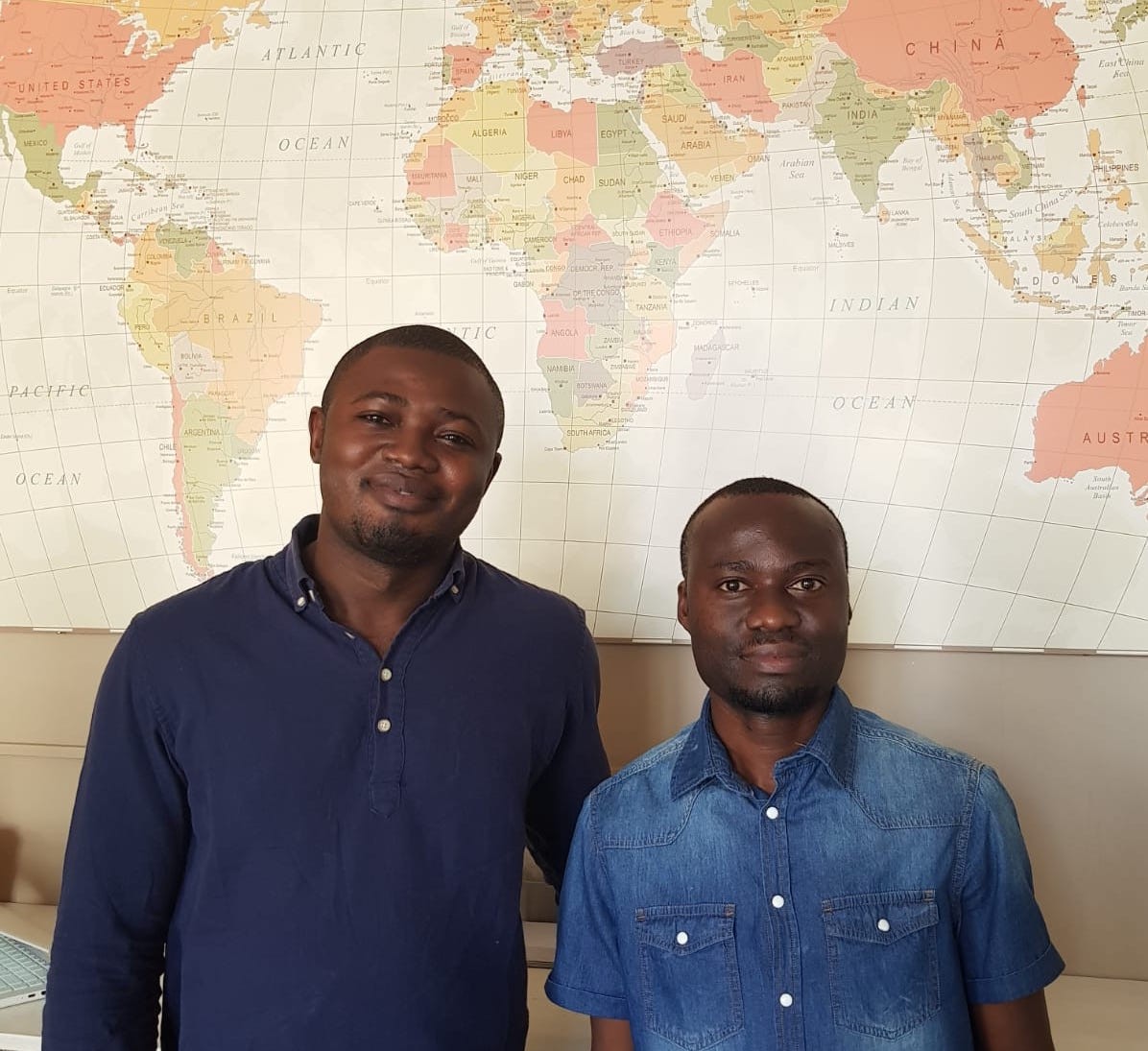 In the picture, Fr. Constant Munkala on the left and Fr John Kawisha on the right.

The Scalabrinian community in Africa is growing, two new recently ordained missionaries, Fr. Constant Munkala and Fr John Kawisha, arrived in Cape Town this month and SIHMA wants to take the opportunity to welcome them and introduce them to the all team.

In the deepest level of human being we encounter the desire to share experiences with others. This was the case of Father Constant Munkala, who decided to leave his country since 2008 towards learning and experiencing about migration and living with migrants.

Father Constant Munkala was born in Kisantu, Kongo Central, in the Democratic Republic of Congo, on March 27th. He is the fifth of seven children.  At 16 he started aspiring to the priesthood, together with other friends in his native parish. In this group, he discovered the Scalabrinian charism, through the Scalabrinian Sisters who were realizing pastoral work in that parish.

At the age of 20, after being accepted, he entered in the Congregation of the Missionaries of St. Charles, Scalabrinians, in South Africa, starting in Cape Town, in 2009, and there he graduated in philosophy at the University of St. Augustine - Johannesburg. At the end of philosophy, he was assigned to the region “Our Lady mother of migrants”, precisely to Brazil, where he began with the postulancy stage.

In 2015, on May 31, he professed his first vows in Vila Nova, Porto Alegre, after a year of novitiate. And went to help in the vocational pastoral in Passo fundo for 6 months. In February 2016, he began his theological journey at the Instituto Teológico São Paulo- ITESP.

In February 2018, he went for a pastoral experience in the Migrants' House, CIAMI, in Santiago - Chilie. He professed his perpetual Vows, saying yes to God forever, in the congregation of the Missionaries of St. Charles Borromeo, Scalabrinians, and Diaconate in August 2020, and on the 14th of February 2021, was ordained as a Priest.

His first months of priesthood were marked by a practical experience having the opportunity to be among migrants, to welcome them, to learn from them, to dialogue, to share life experiences with them in The Cibai Migration, a center that welcomes migrants in Porto Alegre- Brasil. “Being in Cibai Migrations, I was learning every day how to be more human among humans”, declares.

Actually, He is assigned to do his pastoral work, in Africa. For a moment, he will be doing an experience within the religious community that resides in Cape Town. Where he finds himself available to help in whatever the community will want from him.

Here are some words from Father John as well, who tells us a bit about his story and background.

My name is Fr John Kawisha, a member of the missionary of St Charles (Scalabrinian), ordained a Catholic priest this year. I was born and raised in Kitwe, in the Copperbelt province, Zambia. I entered the seminary in Zambia and transferred to Italy for further formation and studies. In 2010, I enrolled for my undergraduate of Philosophy at the Istituto Filosofico e Teologico San Pietro in Viterbo, affiliated to the Università Pontificio Ateneo Sant’Anselmo, in Italy. In 2013 I graduated with a Bachelor's degree in Philosophy. The same year I enrolled for a degree in Sacred Theology at Università Pontificio Ateneo Sant'Anselmo. In 2016 I graduated with a Bachelor's degree in Sacred Theology. In 2019 I enrolled for a Master’s degree in Pastoral Theology and Human Mobility at the Università Pontificia Urbaniana, in Rome. In 2021, I graduated, submitting my thesis on Compassion as a paradigm of the pastoral care of migrants and refugees.

I have done various experiences in the different Scalabrinians projects in Italy and South Africa. In Italy, I worked with Filipino migrants in Rome for a year. In 2016, for three months I worked as a volunteer in an informal refugee settlement in the Province of Foggia in Southern Italy. In South Africa, Cape Town, for two years I worked as a volunteer at Scalabrini center in two areas; Firstly, I was running the multi-faith Spiritual/pastoral desk, where migrants and refugees from all faiths and backgrounds were able to seek spiritual discussion, guidance, and support. The Scalabrini center caters to many material needs of the migrants and refugees, the spiritual desk was there to cater to their spiritual needs. Secondly, I was helping out at the English School program, with the literacy program for adults.

My objective of these Six months with you is to gain some skills that will help me in the Pastoral ministry with the migrants and refugees.

SIHMA is pleased to meet and welcome these young missionaries and look forward to some collaborations with them in the time they will be here in Cape Town.